Everybody Should Be Aware Of This Increased Risk Of Fire Problem 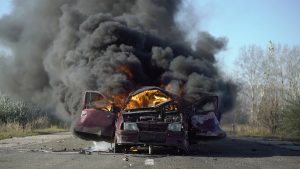 Most people, including those right here in Florida, likely imaging malfunctioning airbags when they hear the word recall. Why? Well, the Takata Corporation's exploding canisters have been in the headlines since May of 2013. The topic will be discussed briefly here for those that don't have a clue about the subject.

The original recall came about after a series of deaths and injuries occurred due to metal shards flying through the cab. It included 3.6 million vehicles but has since grown to 41.6 million. However, the NHTSA, short for National Highway Traffic Safety Administration, estimates the figure will increase to around 65 or 75 million by the year's end, and rightfully so. According to Consumer Reports, the faulty inflators are responsible for at least 24 deaths and 300 injuries worldwide.

This is only one issue though, and there are many others that people need to be aware of so that they can keep themselves and their families safe. Therefore, this post is going to focus on another recall that puts drivers and passengers in danger. So, curious persons should read further to learn a bit more about the problem.

Get This Dilemma Addressed Promptly

Mercedes-Benz USA, LLC. is supposed to begin recalling certain 2020 GLE450 4MATIC and GLE350 4MATIC vehicles on October 1, 2019. As persons can clearly see, defective parts can become part of the equation with any company, including high-end ones. Right now, there are potentially only 128 units affected, but that number could change. During the manufacturing process, the link between the fuel tank and fuel filler pipe may have been welded inadequately.

Thus, fuel might begin to leak from the connection. If an ignition source becomes present, a fire could break out. In turn, the risk of drivers and passengers sustaining injuries or dying increases. The organization should notify owners directly, but those that want to obtain more information can contact MBUSA's customer service team at 1-800-367-6372. Persons should get this recall addressed quickly. Hopefully, the action will help them avoid obtaining burns and other damages.

People shouldn't have to pay for medical bills to recover from injuries that were no fault of their own. However, if they don't take legal action against manufacturers for defective products, that is exactly what will wind up happening. Manufacturer's liability is a legal concept that holds the maker and sellers responsible for faulty goods sold in the marketplace. After all, these items are supposed to be tested and inspected, making sure that they are safe for consumers to use.

Choosing to go it alone can turn into a nightmare fast. Large corporations have legal teams on retainer to discredit claims when they arise. They regularly attempt to delay the proceedings in the hopes that the plaintiff will run out of money and agree to a small settlement. As if that wasn't enough, the lawyers try to twist the facts, and they can make the victim feel as if they did something wrong. Luckily, Floridians don't have to have to handle these matters solo as top-notch representation is only a phone call away.

Our team has been representing southwest Florida residents for over 30-years. We have fought on their behalf to get them the compensation that they deserve and will gladly do the same for you. Plus, the case review is free, and you only pay if a monetary sum is recovered. So, don't delay longer and let a manufacturer get off scot-free. Rather, give us a call to schedule an appointment today.